How to get a Google Photos link in your Google Drive if you can't see the option in settings!

This is just a quick post as it's been annoying me for the past few days and I've finally cracked it!

So you heard all about Google Photos and how great it is, but you want to sync all those great photos back down to a local drive somewhere. You know, so you have a copy at home that you can dip into, etc. and enjoy an offline copy in one place.

I wanted exactly what I've just described. Off I went and got Google Photos running and quickly found it very friendly and easy to use. "Great!" I thought, and then found that one could get a local copy if they used Google Drive.

After downloading and installing Google Drive I found I didn't have a Google Photos folder on my Google Drive. Grrrr...

To cut a long story short, I would have had to wait for it to appear as I have a Google Apps account (free version), as Google do scheduled rollouts of their new features, etc.

How do you get around this? Simple. Log into your Google Apps Admin account and change your New User Feature settings so that you're set for Rapid Release rather than Scheduled Release. You can find out exactly where that is via the following link:

I found this from a comment on the following Disqus page (thank you Google - or not ;) ), that basically said they didn't have the link and they had Rapid Release enabled:

Hopefully this will help someone else in the world from not pulling their hair out too :)

Well, I noticed I've not posted anything for around 2 years! A lot can happen in two years, so I'd better get typing :)
Posted by LaesQ at 12:22 pm No comments:

Hardware audits are one of the most boring things ever! And it's so frustrating when just about everything you have to audit has a barcode on it. It's even more frustrating when you find an old barcode scanner lying around, doing nothing that could be put to good use, helping scanning those barcodes from your hardware. There's only one problem. The barcode scanner has a non-standard serial connector. But of course, this is no real problem for an electronics hacker!

So, I started trying to find out what the scanner was and some kind of pinout for the odd serial connector. The scanner is a Datalogic Touch65 Light Wedge RS232. The fact it had RS232 in it's name gave me hope that somewhere in the mix was a standard RS232 interface. I started searching for some kind of description of the cable I had, but kept finding that the unit can have several different types of cable. This led me on to search for pinouts of the different cables.

A few minutes later, Google turns up this result:

This lists pinouts for all the cables. After some looking at the serial end, I found that I have "power on pin 9" style cable. So from here I could wire up a serial connection. The only problem now is that I don't have any serial ports on my computer!

A quick look at ebay and I find a genuine prolific PL2303 USB to serial adapter for less than a fiver. Bargain.

Once it arrived, I just had to wire it all up and get a 5v source (USB is great for this), and it worked first time! 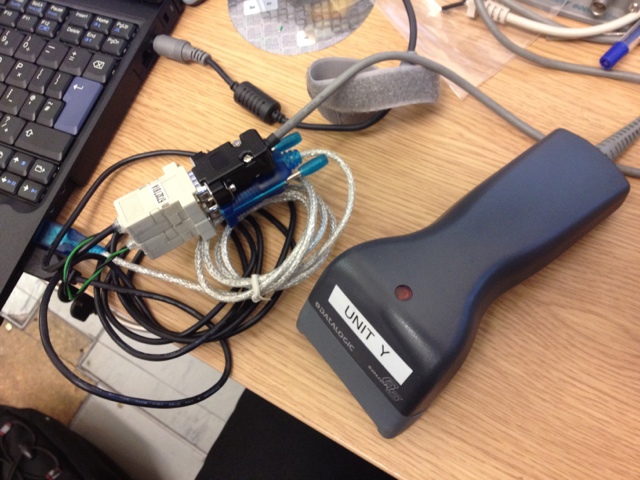 I'm using AACKeys to convert the scanned codes into keystrokes, but it's working fine. Now, back to my audit... :)
Posted by LaesQ at 3:46 pm No comments:

Yes, after many (many) months of silence, I've decided to start posting on my blog again :) I've done a few things recently, but haven't reported on them. So I'm going to set that straight now...

Firstly I've moved house and have the place livable now and the workshop/labs are back up and running again, MUCH bigger and better than before. So expect some pics of that soon.

I've got a couple of new FPGA based Pentagon clones which I plan to get set up somewhere at some point. Also I've got the fantastic V6Z80P+ which I plan to do some work on too. I just need to get a sensible setup for it all to run off of. I plan to have a KVM setup running all three boards, so I can easily have them all setup and not worry about having to unplug and plug in a different board when I decide to move to a different platform.

I've also been working on a number of Arduino based projects. But I'll post the details of those here too at some point.

So watch this space for more updates soon...
Posted by LaesQ at 11:54 am No comments:

Ok, another post to do with Shell/Bash scripting. This time I've been playing with joining multiple files into one big file. Here's the first script:

This gives me all the files that are returned from the ls command in one big file, outputfile.

The next one is a little bit more complex:

Many thanks go to Phoenix^RA for helping out with these simple scripts.
Posted by LaesQ at 12:24 pm No comments:

Recently I ran into an issue using Mac OS X and RAR files. Using BetterZip I can use RAR files if they are a single file or spilt using the .rar, .r00, .r01, etc naming convention. I happened to get hold of an archive that was named .001, .002, etc.
So here's my soution to the problem. This will rename .002 onwards to .r00, leaving you to rename .001 to .rar. I could have added that but couldn't be arsed as it's a two second job to do a manual rename on a single file. 46 other files would have taken quite a bit longer.

Probably not the most efficient script, but it works so there :)
Posted by LaesQ at 12:30 pm No comments:

Adventures in LCD Part I

Ok, recently I sent a +3 Speccy to a guy who lives in Finland. The guy goes by the name of Mr_Spiv (of Scoopex), who decided he'd try his hand at some Speccy coding. The Speccy got to him in one piece and appears to be working fine. Except for one minor problem, his LCD TV gives him a shite picture.
So intrigued by this, I thought I'd help out. We established the problem was not with the Speccy as it gave a good picture when plugged into a normal TV. So next to try some further tests...
First up, try a different device on the LCD TV that uses SCART. So Mr_Spiv attached a PC Engine to his TV. Same thing, bad picture. Ok, so it's the TV doing something odd.
At this point I remembered playing a Wii on a Toshiba 32" LCD TV. It would do some "odd" things with the picture. Difficult to explain what it looks like, but basically, where the picture was motionless, the picture was fine (maybe some scaling, but nothing bad). But where there was movement, an odd effect could be seen. Almost like some kinda "on-the-fly" jpeg compression going on. Very weird. "This is what Mr_Spiv must have been seeing" I thought.
So now this has become almost a challenge for me - find an LCD TV that gives a decent picture on its SCART input. So off I go and buy the cheapest, known brand LCD TV I can from Argos.
A short drive and £110 later and I'm the proud owner of a Samsung SM741MP 17" LCD TV. I bought it from Argos as they have a 30-day money-back guarantee, so if it didn't work right, I could always take it back and get my money back. Magic.
So on to testing this nice new LCD TV. I hooked the Speccy up via the SCART socket and instantly I was shocked at the picture. The first most noticeable thing was it appeared to be interlaced! What? Speccy? Interlaced? Ok, I've seen it in demos but an interlaced +3 menu? The next thing I noticed was some odd discolourations in funny places. Almost the same as you see when using a Speccy via the RF cable, only this was via an RGB cable. Most odd.
So an explanation? The interlaced effect I can explain. The odd colour issue I can not.
My theory for the interlaced look is this. Basically, this LCD TV is an LCD monitor. It can only handle vertical refresh rates in the region of 56-75Hz. So how does it display a 50Hz picture? Easy. It basically turns 3 50Hz frames into 2 75Hz frames. Very clever stuff, but with a static old skool 8-bit picture, it suxx big time, trust me.
Anyhow, this part of the story does have a happy ending. Jojo, the missus, kinda liked the look of the new LCD TV. So as the old Sony one in the bedroom is developing an odd "corrupt settings" issue, I decided to retire the Sony to the loft and the Samsung LCD TV is set up in the bedroom. Happy wife - bonus! ;)
The adventure had only just begun...
Posted by LaesQ at 7:41 pm No comments: